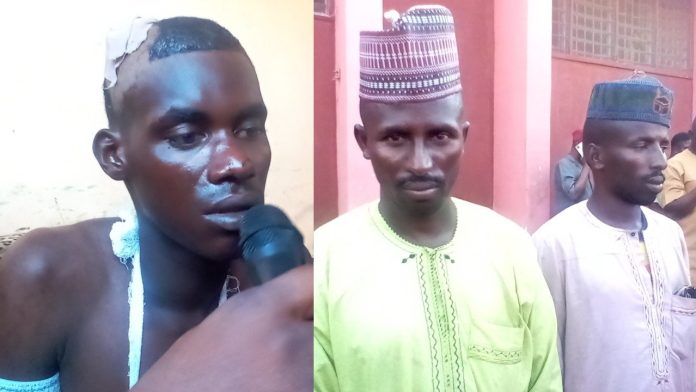 Two Fulani herdsmen, Musa Ibrahim and Amidu Ibrahim, who were victimized by their fellow tribesmen, have been rescued by Amotekun in Ondo State.

The Ondo State Amotekun Corps Commander, Chief Adetunji Adeleye, disclosed the incident to reporters on Thursday 25th November. He posited that the said brothers were abducted some days back in Supare Akoko, Akoko South-West Local Government Area of the state.

Adeleye related that his men were opportune and timely to have spotted the kidnappers, as the victims were tied to a tree and about to get killed.

The Amotekun Commander explained that seven of the kidnappers were spotted at the crime scene when the operatives caught up with them. However, the criminals were not subjugated, as they all fled except for an unlucky Sidi Amodu, who was sleeping and got arrested.

“This is a case of herdsmen being kidnapped by fellow Fulani men. The two victims rescued by the Amotekun Corps are Musa Ibrahim and Amidu Ibrahim; they are siblings and they are herdsmen.

“They were kidnapped in Supare Akoko and valuables were taken from them after the kidnap operation. They were tied and about to be slaughtered by fellow Fulani men before our men got wind of it. We penetrated the forest where they were hiding and we were able to apprehend one of the criminals.

“He confessed to the crime and said the gang was a group of seven and that they migrated into the state from Benin and Kogi states. He said the last kidnap they did involve eight people. He said they all scattered when the Amotekun men came, in order not to be arrested;” Adeleye continued.

The arrested suspect, Amodu claimed he came from Kogi for the kidnap and that they had hired cows to mask their identities because they were not the main owners of the cows.

The suspect mentioned that his gang of kidnappers moved with hired cows from Okenne, Kogi State, to Ondo State, disguised as herdsmen, to perpetuate their crimes.

Amodu recounted that they had operated in some bad parts of the roads in Ajowa Akoko, Akunnu, and Supare areas of Ondo State.

He continued his confession by stating that they had robbed some other spots in Akunnu Akoko, Supare Akoko, and Ajowa Akoko, but the two brothers were kidnapped to be released on ransom.

The victims also narrated their ordeal with the kidnappers, expressing that they had been dealt with mercilessly.

“They tortured us and told us to call our relatives to bring ransom to release us or they would kill us. They beat us and were about to kill us when the Amotekun men arrived in the forest,” Musa narrated.