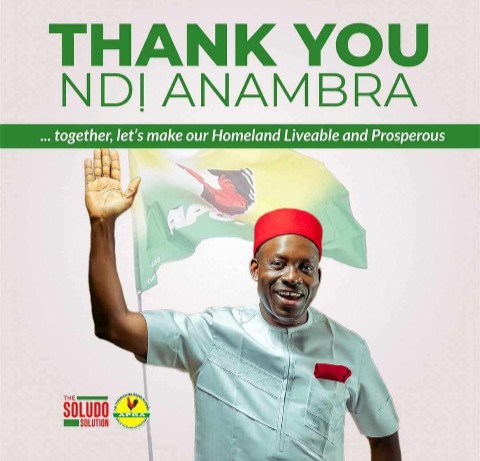 Anambra State Elections has been formally concluded and the results announced by the Independent National Electoral Commission.

The Former Central Bank Governor, and member of the ruling party- The All Progressives Grand Alliance (APGA), Prof Chukwuma Charles Soludo has emerged winner in the just concluded elections.

After the collation of results from the 21 local government areas in the state, Soludo beat his competitors by winning in 19 states.

He had won in 18 local council areas, set aside from Ihiala Local Government Area, which was deliberated on with a supplementary election, on Tuesday.

Soludo came to the prime of the Anambra State Gubernatorial Elections after the collation of results of the 21 local government areas in the state, where he won in 19, adding the just concluded election in Ihiala LGA.

Soludo, 61, won with 112,229 votes defeating Valentine Ozigbo of the Peoples Democratic Party (PDP) who secured 53,807 votes to second place and Andy Uba of the All Progressives Congress (APC) who got 43,285 votes to third.

“That Charles Chukwuma Soludo of APGA, having satisfied the requirements of the law is hereby declared the winner and is returned elected.”

In line with Soludo’s Victory, he went ahead to thank all Anambra State persons that had supported him in his big win.

No Result If Edo, Ondo Polls Are Disrupted – Mahmood Yakubu