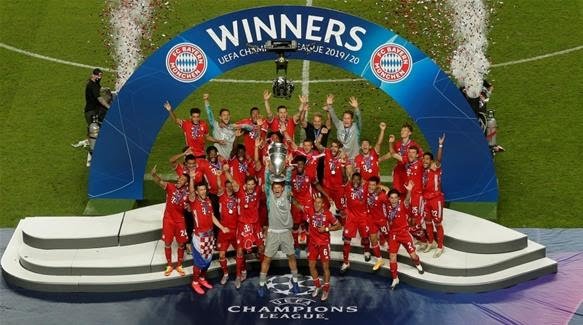 Bayern Munich won their sixth European title after defeating Paris Saint-Germain 1-0 in the Champions League final in Lisbon on Sunday.

Kingsley Coman scored a header in the 60th minute to put the German giants level with Liverpool for the third-most titles all time in the competition and complete a treble of titles this season.

Bayern’s victory at the Estadio da Luz in Lisbon ensures a repeat of their 2013 treble, with coach Hansi Flick matching Jupp Heynckes in securing the continental crown, Bundesliga and German Cup titles in the coronavirus-extended 2019/20 season.

Paris Saint-Germain enjoyed their best-ever Champions League campaign by reaching the final for the first time.

Bayern join last year’s winners, Liverpool, as six-time champions of Europe, only behind AC Milan and Real Madrid, with seven and 13 titles, respectively.

“It is unbelievable. It has hardly been more fun than now playing for this team,” Manuel Neuer, Bayern’s captain and goalkeeper, told streaming portal DAZN.

“Hansi Flick has a huge share in this, the whole coaching staff. It was a team effort by everyone,” said Neuer, who made several big saves to win the elite trophy for the second time, the first being in 2013.

Do you find 9jadailyfeeds useful? Click here to give us five stars rating!
Tags: Bayern Munich