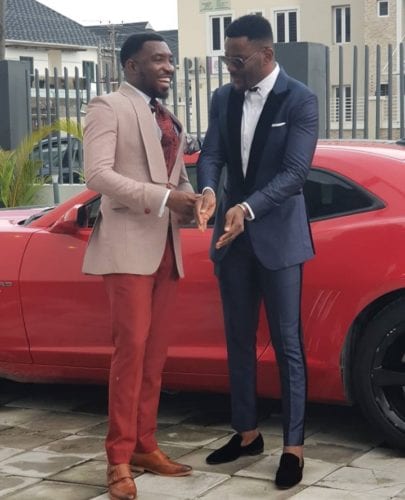 Veteran Nigerian singer & songwriter, Timi Dakolo has joined thousands of people around the world to comment on the BBNaija reunion drama.

The Everything (Amen) crooner took to social media page to commend BBN star, Nengi & the host of the show, Ebuka Uchedu for their composure during Tbaj and Vee’s clash.

Yesterday, singer, Vee and Vlogger, Tbaj made waves on social media after Ebuka asked them to speak on their nonexistent love Quadrangle with Neo and Prince. Tbaj revealed that she wanted to use her friend, Vee’s boyfriend, to make Prince jealous.

According to her, Prince isn’t man enough and she wanted Neo to teach him how to be one.

This didn’t sit well with Vee who smoothly dragged her for betraying her trust which led to a heated, censored exchange of words.

For those who watched the reunion, throughout the exchange unlike other house mates, Nengi and Ebuka remained calm all through the brouhaha.

Timi Dakolo in his Tweet noted that he needs Ebuka’s calmness especially after listening to some of the things that came out of Vee and Tbaj’s mouths. 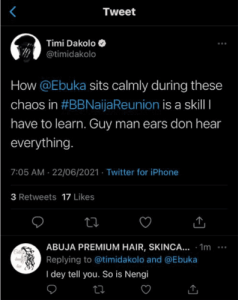