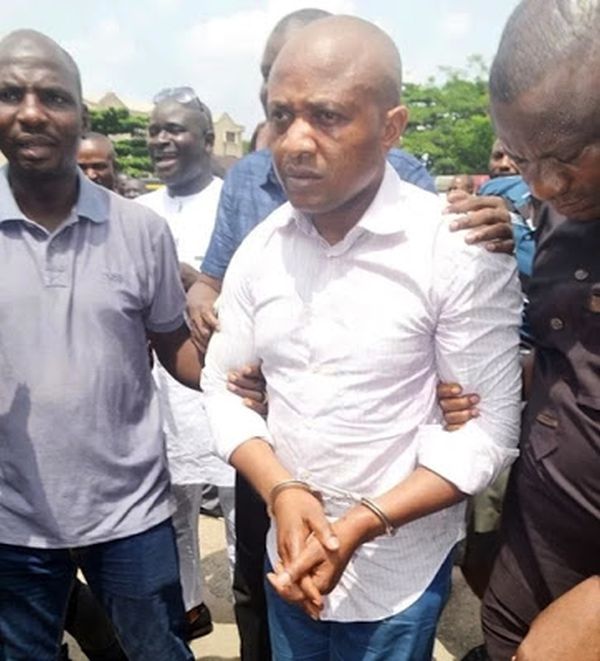 A mild drama unfolded during the trial of alleged kidnap kingpin, Chukwudimeme Onwuamadike (alias Evans), before an Ikeja High Court, when the judge, Justice Hakeem Oshodi, ordered Evans’s new Counsel to write and sign an undertaking to finish the case.

Oshodi gave the order to Mr Oyekunle Falabi on Friday after dismissing a no-case submission filed by Evans’s four co-defendants.

Falabi is from the law chambers of Okpara and Co.

The News Agency of Nigeria (NAN) reports that since the trial began on Aug. 30, 2017, Evans has changed lawyers five times.

Following the ruling on the no-case submissions, Falabi told the court that the chambers of Victor Okpara and Co. had just been briefed about the case.

Upon hearing Falabi’s law chambers, Oshodi said: “Okpara, your principal once delayed a trial in my court for two years. I will never forget it. You must write an undertaking.”

The judge immediately dictated the wordings for the undertaking and Falabi wrote and signed to ensure that he or the law chambers would not abandon the case.

The wordings of the undertaking are:

“I, Oyekunle Falabi, representing the law firm of Victor Okpara, undertakes on behalf of the first defendant (Evans) in suit No. ID/590761, to represent him in defence of this matter at all times when the matter comes up in Justice Oshodi’s Court.

“In the event of any breach of this undertaking, the court is at liberty to report us to our national body, the Nigerian Bar Association (NBA).”

After Falabi wrote the undertaking, Oshodi ordered that the document be witnessed and signed by the Lagos State Solicitor-General, Ms Titilayo Shitta-Bey, who represented the prosecution.

Following the signing of the undertaking by Shitta-Bey, lawyers for Evans’s co-defendants requested an adjournment to prepare for defence.

Responding to the defence counsel’s request for adjournment, Shitta-Bey told the court, “Counsel should take the undertaking seriously.

“Constitutionally, they are guaranteed adequate time to prepare for their defence but not indefinite time.”

Oshodi adjourned the case to Oct. 16 for defence.

Oshodi said the prosecution presented evidence to the court that linked the four co-defendants to the alleged crime.

He noted that during the trial, the fourth prosecution witness, Insp. Idowu Haruna told the court that during interrogation, Evans identified his other gang members to include the third, fourth, fifth and sixth defendants.

“This witness (Haruna) also mentioned that the second defendant is the husband of the third defendant.

“The victim (Dunu) in his court evidence, said that though he was blindfolded, his food was being made in captivity by a woman whose voice was that of the third defendant, the wife of the second defendant.

“There is a prima facie case as the first defendant also implicated the co-defendants in Exhibit 10.

“The court must look at the totality of the evidence so far before it. The prosecution has laid out a prima facie case.

According to the judge, the court finds and holds that no evidence has been discredited on the face of the document.

“The third, fourth, fifth and sixth defendants are now called to open their defence.”

According to the prosecution, the defendants allegedly kidnapped Dunu on Ilupeju Road in Lagos on Feb. 14, 2017, and collected 223,000 Euros (N100m) as ransom from his family.

Dunu who was allegedly held captive by the defendants because his family had not paid an additional ransom, was said to have escaped captivity and alerted the police.

Four witnesses, including Dunu, testified on behalf of the prosecution which closed its case on Jan. 10.