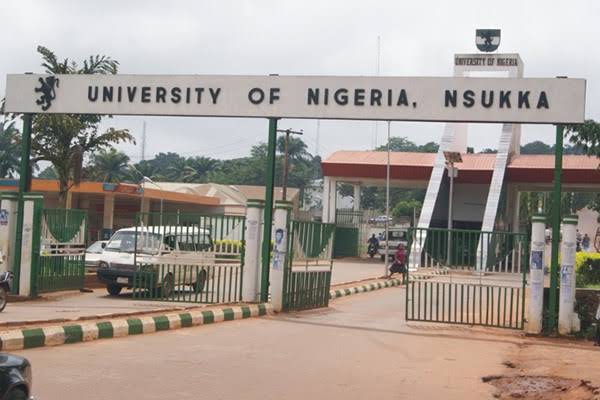 Miss Obi Mirabel, a first-year female student of Medical Laboratory Sciences (MLS), at the University of Nigeria Nsukka, was listed for expulsion after she was caught on video strip dancing.

From the video, the young lady pulled off her cloth to reveal her backside as she was being hailed by her spectators. Reports were gathered that a slated price of ₦10,000 was to be awarded to the best dancer of the show, which she won.

There was yet another video, where one of the lecturers of the Varsity, who happened to be at the scene of the incidence, during its occurrence, vowed to make sure that Mirabel’s admission was terminated.

Watch the video below

Also, earlier on Friday, 29th October, the University Management released a Circular on the actions to be meted out on the Mirabel.

See the circular below

To: The Ag. CSO The entire University

The SUG, All campuses

I just visited Akpabio Hall where a despicable display of character by a female student ended up going viral and dragging the name/integrity of the University of Nigeria to the mud. Following the ignoble act involving strip/nude dancing and despicable sacrilege by a first-year female student of MLS now identified as Obi Mirabel, resident of Presidential Hall, I hereby direct as follows:

1. All forms of shows show adverts via all forms of music, visitation of DJs with loud music to halls of residence are hereby suspended indefinitely. All concerned are to take note and comply without fail.

2. The use of convoy cars especially unmarked vehicles for any form of show/advert for shows is now banned till further notice.

3. Entry into any hostel for all forms of advert involving loud music and associated ill behaviors is now banned. Hall Supervisors to take note of strict compliance.

4. Efforts are on to fish out the alleged strip dancer, Obi Mirabel and send her to the Students’ Disciplinary Board in preparation for her expulsion from the University of Nigeria. Such behavior cannot be condoned in this University.

5. This action by a supposed student of UNN is condemnable and without an accompanying drastic punishment, other students will not desist from such reprobate character.

After the circular was released, one of the executives of the well known Cubana group, Dubby Gustavo, asked the young lady to send him, her account details 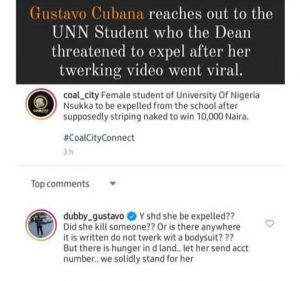 Link to the video of Mirabel twerking, is shown below