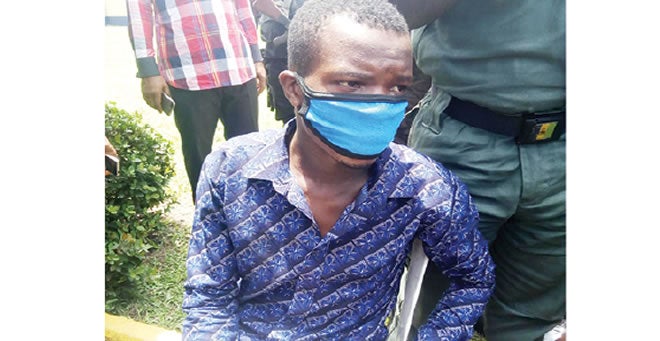 Mr Bright Obemba, the father of one of the three murdered victims in Rivers State, Fortune Obemba, has called on the police not to allow his only son’s killers to escape justice.

The 50-year-old father of three said his son’s killers had inflicted an everlasting pain on him, and as such, did not deserve mercy.

Joy Adoki, an undergraduate of the University of Port Harcourt; Fortune of the Rivers State University; and Nelson Nwafor, were kidnapped and murdered by five members of a killer gang on April 7, 2020.

The police discovered the decomposing bodies of the victims in a shallow grave in a forest in the Eleme Local Government Area of the state after arresting three members of the gang.

Speaking after the state Commissioner of Police, Joseph Mukan, had paraded the five suspected killers, including the gang leader, Bright Iheachi, explained that he felt more pain each time he realised that his son died a very painful death.

Describing Fortune as a good boy, the father added that no amount of money or consolation would make him recover from the shock of the incident.

He said, “My son was a good boy and I never saw him get involved in crimes. It was unfortunate that he followed his friend, Nelson Nwafor, to a place, and today, I cannot see my son. I have lost many things.

“No amount of money will make me recover from the shock. I want Nigerians to pray for my family. I am begging Nigerians and the police not to allow my son’s killers to escape justice. My only son went through a painful death. He was a student of the Rivers State University. He was a 100-level civil engineering student.”

Bright thanked the President, Major General Muhammadu Buhari (retd.), Governor Nyesom Wike and the CP for their efforts in unravelling the circumstances that led to the death of his son and the two others.

“I went to various police stations and I could not find my son. At the end, I heard that my only son had been killed. He would have been 20 on September 19, 2020.

Meanwhile, Iheachi, the 25-year-oId leader of the suspected killer gang, has admitted ordering that the trio be shot because he was angry.

Iheachi, who was paraded alongside the other four suspects, said one of the victims, Fortune, was indebted to him for a long time and he could no longer endure it.

The gang leader was, however, silent on the type of business that made Fortune to be indebted to him.

Iheachi, who claimed to have bagged an Ordinary National Diploma, said, “I just finished my OND from the Conarina Maritime Academy, Abraka, Delta State. I studied Multiple Science.

“Ifinished on February 4, 2020. I am 25 years’ old. I am the leader of the gang. I don’t drink and I don’t smoke. I ordered that they should be killed out of anger. The money has taken a very long time.”

Another suspect, Friday Akpan, from Akwa Ibom State, insisted that Iheachi and another suspect raped Adoki before the three victims were killed.

Earlier, the CP had told newsmen that the two remaining suspected killers, who were on the run, had been arrested, bringing the number of the suspects in custody to five.

Mukan explained that while one of the suspects, Isaac ThankGod, was arrested in Warri, Delta State, on Tuesday, the fifth suspect, Christian Chimezie Mbakwe, was apprehended in Imo State.

“Further confessions by the suspects earlier apprehended led to the arrest of the fourth and fifth suspects, namely Isaac ThankGod, a native of Eken in the Khana LGA of Rivers State, and Christian Chimezie Mbakwe, 39, a native of Obowo LGA of Imo State.

“The fifth suspect was arrested in Imo State, where the Toyota Avalon car with number plate LSR 197 FY, belonging to the deceased Nelson Nwafor, was recovered from him. The President gave an order that the remaining two suspects must be arrested. This, we have done.”