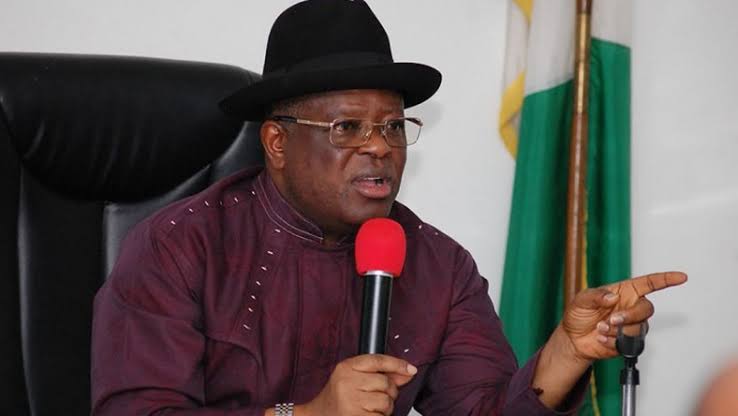 The Ebonyi State caucus in the National Assembly has disowned the state governor, David Umahi, who defected from the People’s Democratic Party (PDP) to the ruling All Progressives Congress (APC).

Governor Umahi, on Tuesday, said his defection to APC was not to grab the party’s 2023 presidential ticket as being speculated in some quarters.

Briefing newsmen on Wednesday in Abuja, the Chairman of the caucus and former governor of Ebonyi, Sam Egwu, said though Umahi has the right to join any political party of his choice, the reasons he advanced for his deflection was unwise.

He said the National Assembly members from the state, all PDP members, would not leave the party.

“We remain proud card carrying members of the PDP, the platform on which we contested elections in 2019 and won,” Egwu said.

He argued that the governor should be the last person to defect having benefited immensely from PDP.

He was appointed the chairman of the PDP in the state, elected deputy governor and two-term governor on the platform of the party, Egwu added.

A northern group under the auspices of North East Professionals Network, (NEPN) said the defection of Ebonyi State Governor, David Umahi from the opposition People’s Democratic Party (PDP) to the ruling All Progressive Congress (APC) will benefit the region politically.

The group Coordinator, Alhaji Mohammed Yusuf, said Mr. Umahi has displayed an uncommon courage in order to take Ebonyi and the South East to the mainstream politics of the nation.

According to him, It will only take a man of courage and vision to accomplish such an unprecedented feat since the return of democracy to Nigeria in 1999.

“We equally congratulate the people of Ebonyi and the entire South East who stand to benefit immensely from the wise and patriotic decision of Governor Umahi” Yusuf said.

He said the group is optimistic that with the coming of Governor Umahi into the APC, the South East Region is poised to take its rightful place in the nation’s politics.

He described Governor Umahi as a bridge builder, who has the capacity to unite the Igbo and organize them to pursue a common course for the development of the South East and the nation in general.

The group added that the North is a historic political ally of the South East and the youth of the North are ever ready to support the actualization of the political aspiration of the Igbo people especially with the calibre of leaders they have especially in the person of Governor Umahi.