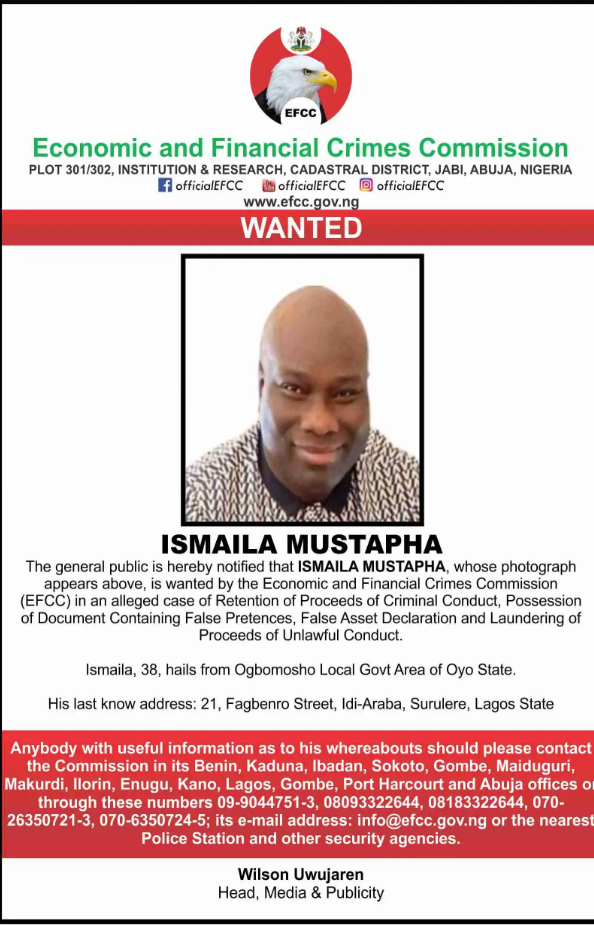 In a statement issued on Wednesday, August 3, the EFCC urged members of the public with information on his whereabouts to contact the anti-graft agency.

“Wanted by the EFCC: Ismaila Mustapha. Anyone with useful information as to his whereabouts should contact the EFCC or the nearest police station,” the brief statement read.

Mompha, alongside his company, Ismalob Global Investment Limited, is being prosecuted by EFCC, on an eight-count charge bordering on ”conspiracy to launder funds obtained through unlawful activity, retention of proceeds of criminal conduct, laundering of funds obtained through unlawful activity, failure to disclose assets and property, possession of documents containing false pretence and use of property derived from unlawful act.”

One of the counts reads: “Ismaila Mustapha, Ahmadu Mohammed (at large) and Ismalob Global Investment Limited, sometime in 2016, in Lagos, within the jurisdiction of this Honourable Court, conspired amongst yourselves to conduct financial transactions to the tune of N5,998,884,653.18 ( Five Billion Nine Hundred and Ninety-eight Million Eight Hundred and Eighty-four Thousand Six Hundred and Fifty-three Naira Eighteen Kobo) with the intent of promoting the carrying on of specified unlawful activities to wit: obtaining by false pretence.”

He pleaded “not guilty” to the charges, prompting his trial to begin.

He was remanded in the custody of the EFCC but later granted bail of N200 million, which he did not fulfill. Later, the bail was reduced to N25 MMM.

The trial had been halted on Thursday, June 16, 2022, due to the defendant’s absence.

On June 10, the EFCC charged him with violating a court order by traveling to Dubai with a new international passport.

On Wednesday, June 22, 2022, Justice Mojisola Dada of the Special Offences Court sitting in Ikeja, Lagos, revoked the suspect’s N200m bail and issued a bench warrant for his arrest due to his absence from trial.

Mr. Kolawole Salami, the defense counsel, prayed the court for an extension of time to bring back the defendant to court.