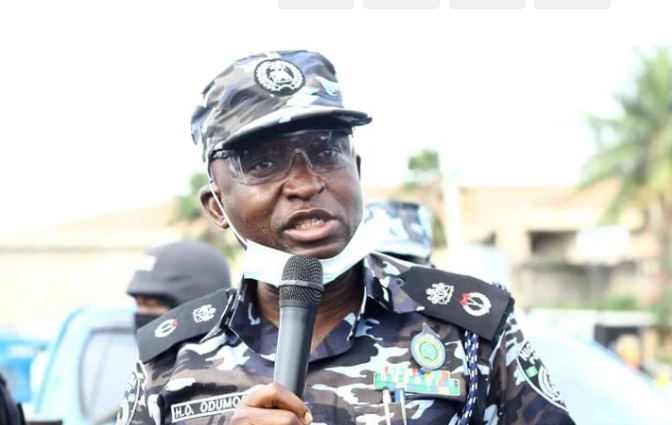 The Lagos State Police Commissioner, Hakeem Odumosu, has revealed his reason why he ordered his men to fire tear gas at the #EndSARSMemorial protesters at the Lekki Toll Gate on Wednesday.

Recall, that earlier today the youth of Nigeria took to the street to protest in different part of the country including Lagos, and Abuja, as a way of marking the first memorial anniversary of the #EndSars protest and the Lekki massacre that resulted in many losing their lives in the process.

The Lagos State Commissioner of Police, CP Hakeem Odumosu, on Wednesday, said hoodlums were dispersed at the Lekki tollgate, the venue of the #EndSARSMemorial protest in Lagos.

CP Odumosu, who spoke to newsmen at the tollgate, stated that the #EndSARSMemorial protesters had already left the location, adding that those who sticked around were hoodlums with ulterior motives to steal and cause mayhem.

While explaining to newsmen the reason behind the  operatives of the Command fired tear gas canisters to disperse those at the tollgate, he made the following statement.

In his words, “The activists had informed us that their activity will start by 8am and last till 10am

“They had an agreement with us that they will be having a car procession, which they are done with and have left.

“They told us that they finished their activity around 10am, adding that whoever was found still hanging around is not part of them.

“Those you can see around now are hoodlums who want to steal and cause destruction.

“We found knives, cutlasses and other dangerous materials in their(hoodlums) possession.

“Those cannot be protesters but hoodlums, and that is why they were chased away so that peaceful citizens can go about their lawful businesses.”

In the long run, the CP went on to debunk claims that someone was stabbed to death at the protest.