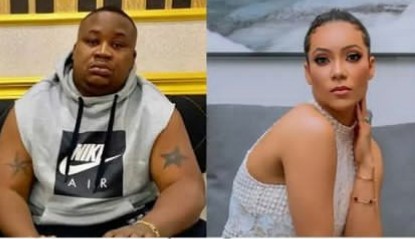 A recent video has emerged online, showing where the Ex-BBNaija housemate, Maria had referred to her fellow housemate, Pere as ‘Kelvin’.

In the video, Maria was spotted calling Pere, ‘Kelvin’, but as soon as she realized her mistake, she corrected herself.

The video was pulled out with the claims made by media socialite, Cubana Chief Priest, who alleged that Maria was having an affair with her Sister’s husband- Kelvin.

The link to the video is found here

Cubana Chief Priest leveled up some unconfirmed claims that Maria was having extramarital affairs with Kelvin, to the extent of threatening his sister.

Cubana Chief Priest in his post on social media expressed his dissatisfaction against the former BBNaija housemate, Maria, who he claimed, made videos of some properties she had gotten from the said, ‘Kelvin’.

The bone of contention from Cubana Chief Priest’s claims was that his sister already had both male and female children from her marriage with Kelvin, yet Maria had come to destroy their home.

See the posts made by Cubana Chief Priest below 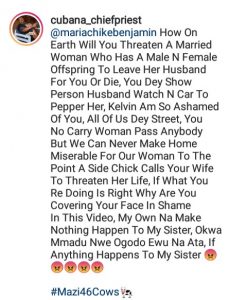 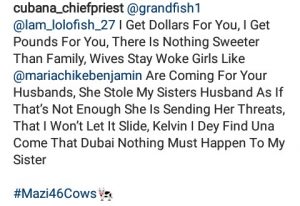