The management of the Federal University of Oye-Ekiti (FUOYE) has recently published an internal memo, banning students from riding cars to the campus.

The management of the Institution complained of the recklessness exuded by some of the students, who bring cars into the campuses. They also noted that the recent occurrence has now become a threat to the life of the commuters and pedestrians moving around in the Varsity.

The memo which was titled “Prohibition of use of cars by students on the University Campus” and signed by FUOYE Registrar, Mufutau A. Ibrahim dated November 10, 2021’ read as follows:

“The University Management has noted with deep disappointment, the indiscriminate and reckless driving by some students within the University.

“This has put commuters and pedestrians at high and unnecessary risks.

“Consequently, the Management has directed that no student be allowed to drive/use any car on the University Campuses with immediate effect.

“All students concerned have been directed to henceforth pack their cars properly outside the campuses.” 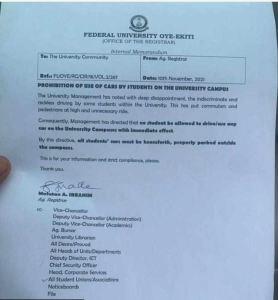