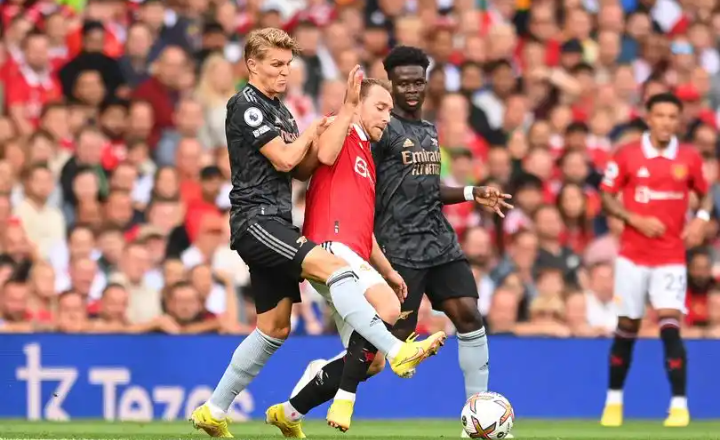 Arsenal appeared to have taken the lead at Old Trafford, but referee Paul Tierney overturned Martinelli’s goal after a lengthy VAR review.

Martin Odegaard was adjudged to have committed a foul on eriksen on Arsenal’s first goal at Old Trafford.

Gabriel Martinelli thought he’d given Arsenal an early lead at Old Trafford against Manchester United. In the 11th minute, the Brazilian broke through and finished coolly past David de Gea.

The goal was overturned after a VAR review because Martin Odegaard was adjudged to have fouled Christian Eriksen in the build-up. After a lengthy VAR review, referee Paul Tierney ruled out the goal after consulting the screen on the side of the pitch.

“It was soft no doubt about that,” said Gary Neville on Sky Sports’ Super Sunday coverage. “There are complaints, but I thought Eriksen was fairly dispossessed. I don’t think he could see the Man United player that came and got it off him, it’s Odegaard, he just steals it – there’s a little nudge – but it’s something from nothing.

“It might be a foul, it could be that knee that comes across. From the other angle it looked really soft but there is that other angle that came out which I think means it will be disallowed… it’s that knee into the side of Eriksen that’s going to cost Arsenal.”

Gary Lineker was not happy to see VAR intervene after Gunners forward Martinelli hit the back of the net.

He tweeted: “Here we go again. VAR is so tedious.

“It certainly wasn’t clear and obvious (they looked at about 20 replays) and VAR is there for howlers not to re referee the game. It’s so boring.”

Alan Shearer also gave his opinion on the disallowed goal clear. Shearer expressed his anger on Match of the Day on Saturday night after some controversial VAR decisions dominated the day’s fixtures.