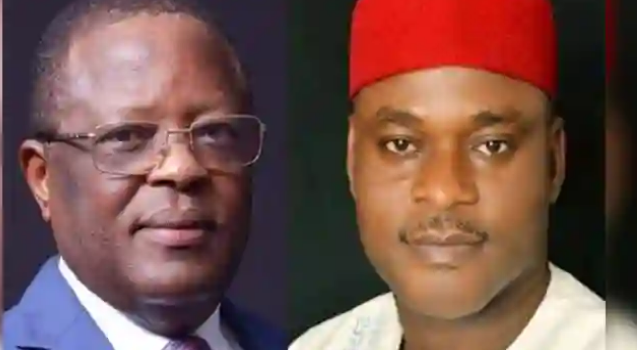 David Umahi, the embattled governor of Ebonyi State, and his deputy, Dr. Eric Igwe, have petitioned the Abuja Division of the Court of Appeal to have the judgment of Justice Inyang Ekwo dismissing them from office on the grounds that they defected from the PDP to the APC set aside.

The court held that the politicians’ votes in the state governorship election belonged to the PDP and could not be transferred to the APC after they defected.

In their eight grounds of appeal, Governor Umahi and his deputy, through a team of lawyers led by a Senior Advocate of Nigeria, SAN, Chukwuma Ume, claimed that Justice Inyang Ekwo of the Federal High Court in Abuja erred in law in his judgment and created a grievous miscarriage of justice.

They argued that the trial court, in ordering them to vacate their offices, based on the suit, marked FHC/ABJ/CS/920/2021, attempted to overrule a subsisting decision of the Supreme Court in AG Federation v. Atiku Abubakar & 3 ORS (2007) LCN/3799 (SC).

They contended that the apex court had in its decision, held that no constitutional provision prohibited a sitting president or vice president, and invariably, governor or deputy governor, from defecting to another political party.

They maintained that the trial high court judge erred, when he held thus: “I have not seen any authority which propounds that where a governor or deputy governor defects his political party on which platform he was elected into office, he cannot be sued by that political party to reclaim its mandate… Section 308 of the 1999 Constitution did not envisage such a situation.”

They argued that the trial court ought to have dismissed the case of Peoples Democratic Party, PDP, in view of the clear provision of Section 308 of the 1999 Constitution (as amended).

“The provisions of Section 308 are specific, notwithstanding anything to the contrary in this constitution, but subject to subsection (2) of this section, no civil or criminal proceedings shall be instituted or continued against 3rd and 4th Appellants during their mandate in office as Governor and Deputy Governor respectively.

There is no provision of the 1999 Constitution (as amended) that provides for the removal of 3rd and 4th appellants as sitting governor and deputy governor respectively of Ebonyi State for reason of defection.”the counsel said

Do you find 9jadailyfeeds useful? Click here to give us five stars rating!
Tags: Governor Umahi