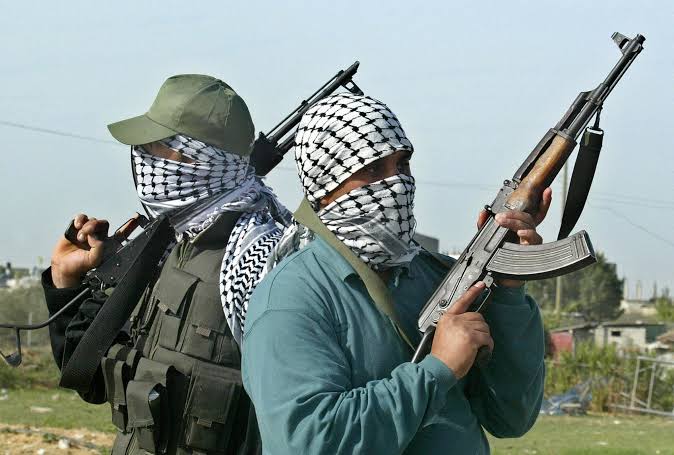 18 Kano traders who were travelling to Abia were kidnapped by Gunmen in Kogi State.

The victims, all from the popular Kantin Kwari Textile Market, were travelling to Aba in Abia State to purchase goods when their vehicle was attacked by gunmen who took them into the bush.

Abductors of the 18 traders have already contacted relatives with ransom demands. Textile seller Danladi Giredi, an elder brother to one of the victims explained how the incident happened.

“My brother usually travels to Aba after every two weeks to buy yards.

“On Saturday last week, he told me that he will be travelling again tomorrow (Sunday) and we bade him farewell.

“After they departed Kano, he called my mother and informed her that their car developed a fault and was in flames, so, they put the fire off and continued the journey until it developed the same problem.

“So, they decided to halt the journey and another was sent to them before they could proceed.

“They continued the journey until they passed BUA Cement Factory after Okene, in Kogi State, where another driver, coming from the other lane, warned them that armed robbers have blocked the road.

“They stood there for a while, indecisive. Then gunmen came from their back, emerging from the bush, shooting sporadically. Some of the passengers had already come out of the car, so on hearing the gunshots, they ran away.

“But, my brother, Khalid was still in the vehicle alongside 18 others, so they were trapped inside and abducted. The car is a luxury bus belonging to Welfare Transport,” he said.

Giredi further explained that the bus was carrying about 50 passengers, most of whom escaped into the forest.

“They were 19 trapped. One of them is lame, so the kidnappers freed him and went away with the 18. They also shot the bus’ spare driver.

“While on the journey, he (Khalid) was always calling our mum on phone. After informing her earlier that their car was in flames, she decided to keep calling him afterwards to make sure all was well. But, he was not answering,” he said.

‘Mum, your son is kidnapped’

Giredi added that “She then told our younger brother that Khalid was not answering her calls.

“After she kept calling, the driver of their car later answered, as he has already thrown his phone and wallet in the car before their abduction.

“He (the driver) told her that her son was kidnapped and that he was only able to escape because he hid under the car. Others broke their legs while trying to escape.

“Later, around 4pm on Monday, a lady called me on the phone, asking if I am Khalid’s brother and I replied yes. Then she hooked me with one of the kidnappers and asked how close we are.

“From there, we started the negotiation process.

“They said we should pay ₦5m, when I told them that we don’t have the money, they said some were asked to pay ₦10m, some ₦15m. he then cut off the call.

“Then I called him later in the evening where he asked whether we have raised the money.

“I asked for a discount again but he cut off the call again.

“The following day (Tuesday), I called them again and told them that I want to speak to my brother. He informed me that they are being tortured,” he said.

On the identity of the abductors, Giredi said although all their communication was done in Hausa, their accent suggests they are Fulani.

After all efforts of possible negotiations have proved futile, the relatives agreed to negotiate collectively for all the 18 victims as not all of them have a uniform capacity to raise the required amount.

Another source in the market, who pleaded anonymity said, “I later called one of the staff of the luxury bus company and he said I should stop calling them.

“That we should negotiate for all the 18 victims instead as some of them don’t have the amount to pay.

“He called them and they asked us to pay ₦50m for all the victims, but we agreed to pay ₦5m yet they declined. They were even insulting us that they have a lot to do with the money, just like every person. We added ₦1m the following day (on Wednesday), they still didn’t agree.

“After very long negotiations, with threats of killing them, torturing them, we finally agreed on ₦25m”.

‘We are asking for contributions to raise the amount’

“People are still contributing, but raising ₦25m is not that easy. After raising what we can get here, then we (the relatives of the victims) will also contribute the balance,” Bashir, one of those raising the money, said.

On whether there is any plan by the market board to support them, Giredi said they only told them that they are aware but have so far not promised to offer anything.

Meanwhile, the Managing Director of Kantin Kwari Market Management Board (KKMMB), Alhaji Abba Muhammad Bello has said that the Kano State government through the board is doing everything possible to ensure their safe return.

On whether they will help the victims’ relatives in raising the ransom amount, he said the state is on top of the situation but declined further comment as he said he doesn’t want to pre-empt their plans especially since the issue is centred on security.