Chigozie Effe, a Nigerian man has taken to social media to recount the experiences a man identified as Suleiman experienced while he was down with cancer.

The young man narrated how his lover stood by him while he was battling cancer.

After Suleiman completed his treatments, he got married to the lady, who had endured with him during his trying times.

Effe Chiagozie, a Facebook user who happened to know the couple, shared a series of photos and narrations yesterday, 21st November of how the couple battled with cancer.

“Christ is the King!

“Christ is indeed the King and am glad to be part of this testimony in the life of Suleiman who is now married to the lady of his dreams and who stood by him in his dark moments. “Suleman dying of Colon Cancer at the University of Jos Teaching Hospital. He was abandoned to his fate but Christ never abandoned him. “The Street Journalist had an interview with Suleman at his residence in Jos. He was in dire pain while speaking to me. However, the interview brought him to the limelight as over 3 million Naira was raised for him.

“Suleman and his wife at their wedding ceremony that took place at Living Faith Church, Jos North, Plateau State 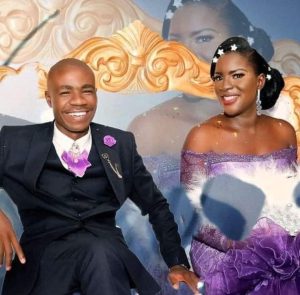 “They are now Mr. and Mrs. Suleiman Momoh and Sulieman is hale and hearty now.

“This is the end of my testimony.

“The Lady is wonderful…