A middle-aged woman, simply identified as Iya Ayo, was arrested for tying up her 10-year-old son, Ayo, in a sack and locking him up in a wardrobe for four days in the Fesojaye community, Owode, in Osun State.

The woman reportedly tied up her son last Thursday until on Sunday May 17 when a neighbor heard his cry for help. The neighbor immediately alerted the leaders of the community who in turn alerted the police, The woman was arrested and her son freed. 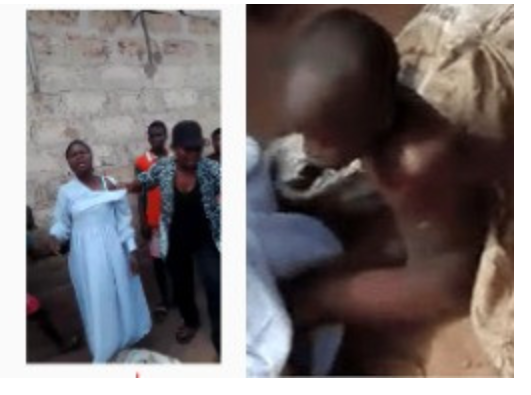 When interrogated, Iya Ayo who is separated from Ayo’s father, said her son was possessed with an evil spirit and was in the habit of stealing people’s money.

Confirming the incident to 9jadailyfeeds, the spokesperson of the state police command, DSP Yemisi Opalola, said the woman was arrested and made to sign an undertaking never to maltreat the child. Opalola said efforts are being made to search for the father of the child so the woman can hand Ayo over to him. She added that the police are closely monitoring the situation.

”We went to arrest her and she told her part of the story, how the boy has been disturbing her. In a nutshell, the police told her to go and look for the father of the boy if she cannot take care of the child again.  She promised to do so. The DPO also followed up yesterday to ensured that the father is found. There is no way the police can keep the child with them. They have made her to write an undertaking even with a surety who promised she will never do it again.” she said

Florence, wife of the late Oyo governor, Abiola Ajimobi, says her husband is in heaven. The widow made the declaration on Sunday in Oluyole, Ibadan. […]

Kaduna governor’s son, Bashir El-Rufai, calls APC gubernators attention to road network. The beauty of liberal democracy is in its uniqueness to give freedom of […]

“Buhari Has Delivered On All Campaign Promises” – Kebbi Governor Bagudu

The Kebbi State Governor, Senator Abubakar Atiku Bagudu, says that President Muhammad Buhari has delivered on the three cardinal promises he made during the 2015 […]