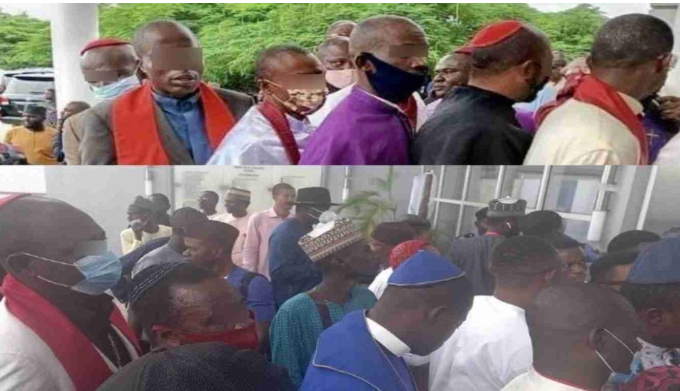 The All Progressives Congress (APC) and presidential candidate Bola Tinubu have been accused of hiring people “fake bishops” to pose as bishops and clerics during the unveiling of senator Kashim Shettima as his running mate.

Former Lagos governor Tinubu, 70, who is the APC’s presidential candidate for 2023, and Shettima, 55, are both Muslims. In addition, the same-religion ticket has been criticized and condemned in some quarters.

People from all walks of life attended the unveiling of Shettima, a former Borno state governor, as his vice-presidential candidate on Tuesday in Abuja, including some Christian clergy who some claimed were imposters.

Some Nigerians took to the comments section to explain why the clerics were not legitimate bishops. See some of the reactions below.

Even with her wedding ring

It's high time you people stopped making these people know their mistakes. Let them keep making their errors. The more you alert them, the more informed they get. Please let them continue with AshiShe

D tailor no sew am well, Dem used Tinubu's head for the measurement

Meanwhile, Tinubu noted in his speech at the unveiling that much has been said and written about his decision to select Senator Shettima as his running mate.

The APC national leader stated that he had read and listened to everything said and written about his choice.

“It has been an emotional and moving period. I understand the strength of feeling that has been displayed by some within our party and I cherish and respect the views of all,” he said.

Tinubu stated that he picked Shettima to secure victory and ensure good governance.

He said, “I remain steadfast in my belief in the selection of Senator Shettima. I am unwavering in my belief that is the very best person to run for office and, hopefully, govern by my side.

“I believe in the project this party embarked on at the moment of its foundation. I believe our diversity is our strength and I believe that we must be victorious to achieve the greatness of which this country is capable.

“All my life, my decisions regarding the team around and supporting me have always been guided by the principles of competence, innovation, compassion, integrity, fairness, and adherence to excellence.

“In politics, these principles are sacrosanct. Without them, there can be neither victory nor good governance. I seek both. I applied them as Governor of Lagos. I apply them again now.

“This chapter in our nation’s history demands a bold yet pragmatic approach. In selecting Senator Shettima I have committed myself to this path. I have made the hard choice because I believe it is the best choice.

“This is where politics must end and leadership must begin. True Leadership is not grounded in religion, populism or sentiment. To forge ahead as a nation toward development and prosperity, we must break free of old binds.

“Senator Kashim Shettima’s career in politics and beyond shows that he is eminently qualified not only to deliver that all-important electoral victory, but, also, step into the shoes of the Vice President.

“As a man with the talent, maturity, strength of character, and patriotism he has my implicit confidence and faith,” he said.