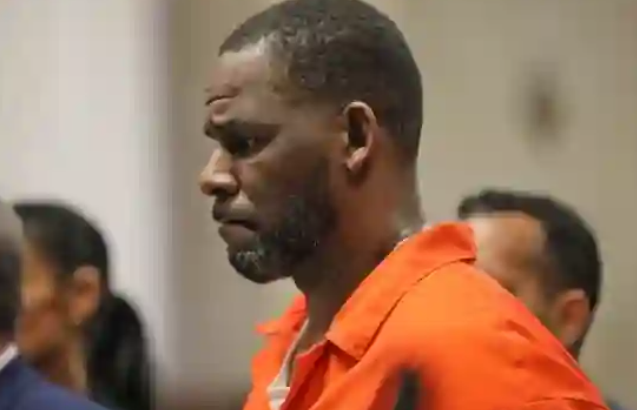 R.Kelly was sentenced to 30 years in federal prison months after being found guilty on all nine counts in a high-profile sex trafficking case.

Kelly, 55, was found guilty of sex trafficking and racketeering last September after a six-week trial.

Kelly’s sentence was handed down by Judge Ann M. Donnelly on Wednesday, June 29, despite the defense lawyers’ request for a sentence of 10 years or less. Prosecutors had requested at least 25 years in prison.

Judge Donnelly told Kelly that he had left a “trail of broken lives,” and that “even the most seasoned investigators will not forget the horrors your victims endured.”

‘These crimes were calculated and carefully planned and regularly executed for almost 25 years,’ she said. ‘You taught them that love is enslavement and violence.’

Kelly, who declined to comment on Wednesday, learned of his fate after his accusers testified in court, in tears and anger, that he had preyed on them and misled his fans. He was also sentenced to $100,000 in fines.

Since his trial, Kelly has been held at the Metropolitan Detention Center in Brooklyn. It is unknown where Kelly will serve his sentence.

His attorneys argued that he should be sentenced to no more than ten years in prison because he had a traumatic childhood that included “severe, prolonged childhood sexual abuse, poverty, and violence.”

As an adult with ‘literacy deficiencies,’ the star was’repeatedly defrauded and financially abused, frequently by the people he paid to protect him,’ according to his lawyers.

Allegations that Kelly abused young girls first surfaced in the 1990s. He was sued in 1997 by a woman who claimed sexual battery and harassment while she was a minor, and he later faced criminal child pornography charges in Chicago involving a different girl. In 2008, a jury there acquitted him, and he settled the lawsuit.

Earlier in the day, several women who testified against Kelly during the trial described how he promised to mentor them and help them achieve fame, only to subject them to degrading sexual treatment and physical harm. Many stated that the abuse led to mental health problems that persist.

A federal court jury in Brooklyn convicted him after hearing that he used his entourage of managers and aides to meet girls and keep them obedient, an operation that prosecutors described as a criminal enterprise.

Kelly, born Robert Sylvester Kelly, systematically ‘preyed upon children and young women for his own sexual gratification,’ prosecutors wrote in a court filing earlier this month.

Kelly, according to several accusers, subjected them to perverse and sadistic whims when they were underage.

Before he was sentenced, seven of them gave impact statements.

Angela, one of the victims, stood up in court and called Kelly a “Pied Piper” who “lured children with his money and celebrity.”

‘With every addition of a new victim, you grew in wickedness,’ she said. ‘You used your fame and power to groom and coach underage boys and girls for your own sexual gratification.’

‘Today we reclaim our names,’ she said. ‘We are no longer the preyed-upon individuals we once were.’

‘I pray that god reaches your soul,’ she said, as Kelly glanced up at her briefly before lowering his eyes back to the table where he sat.

The second victim to speak in court on Wednesday said she had no idea that a concert in September 1994 would forever change her life.

Addie, who previously testified at Kelly’s trial but did not provide her name, took several deep breaths before reading her statement on Wednesday.

‘I never knew that going to that concert in September of 1994 was going to change me forever,’ she said.

Kelly, according to Addie, sexually assaulted her on the night of his concert and she did not see him again until the trial.

For decades, she stayed silent, because ‘it was a time of silence,’ she said, which is something she says she now regrets.

‘The last four years have been a rude awakening of how my silence has hurt others.’

Lizette Martinez, one of the women featured in the docuseries, spoke to the court on Wednesday, with attorney Gloria Allred by her side at kelly’s sentencing.

‘January 1995 eventually changed me forever,’ Martinez said, referring to the day she met Kelly at a mall.

Martinez, 17, was a budding singer who had been promised a mentor by Kelly. Martinez, on the other hand, claims he began abusing her two months after they met.

‘I was left in shock, confused and in tears,’ she said.

‘I do not know how to put a price on all I’ve gone through. I am now 45, a mother and I struggle with mental health.’

‘Robert, you destroyed so many people’s lives,’ she told him

A fourth victim, identified as Jane Doe No. 2, took the stand next, detailing how a sweaty Kelly would force her to perform oral sex on him after he returned from playing basketball.

‘I felt special, because someone who was special to the world was interested in me,’ she said.

As she continued with her statement, Kelly began to speak with his lawyers, causing the witness to come to a halt and raise her hand.

‘I’m sorry,’ she said, looking at Kelly. ‘I don’t want to interrupt his conversation.’

‘No price is too high to pay for your happiness,’ she said. ‘I hope you go to jail for the rest of your life.’

Kitti Jones, the fifth woman to speak, said Kelly did things to her that she “plans to take to her grave.”

‘Many of us have been waiting for this day to come,’ she added.

The next woman to give her statement, only identified as Faith, spoke directly to Kelly, with her father by her side.

‘I hope you forgive yourself,’ she said as she began to cry. ‘I forgive myself.’

Do you find 9jadailyfeeds useful? Click here to give us five stars rating!
Tags: R. Kelly