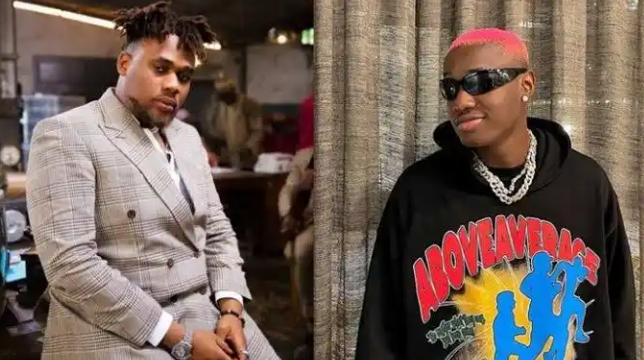 The feud between the two artists began in July with a tweet by Ruger in response to a fan of BNXN who claimed the latter was the better artist.

Ruger implied in the post that his success in the music industry was due to his solo songs, whereas BNXN, formerly known as Buju, relied on collaboration to make hits.

“I love Buju, he’s good but he’s not better than me. Everything I’ve done since the beginning was only RUGER. All my hits are JUST RUGER. I’m always proud going on stage around the world with my own hits and everyone is singing along. You see the difference?” he wrote.

BNXN, who released his new project, ‘Bad Since ’97, on Wednesday, celebrated the album which currently tops the Apple Music’s Nigerian album chart, by sending shots at Rudger.

Reacting to the tweet, Rudger asked BNXN to “get a solo hit then talk to me fatty bum bum.”

“The project will ALWAYS be more important than the hit! Look at Burna Boy! That’s my yardstick, you think I wanna blow with 1/2 songs and I no fit come back ?? When he was dropping you didn’t call those songs hits back then but you see now? Open your eye patch,” BNXN replied, referring to Rudger’s pirate get up.

Sharing pictures of Ruger’s albums, Pandemic EP and The Second Wave (Deluxe edition), which currently sit at number 64 and 33 respectively on the same charts, BNXN also tweeted, “Project #1 and I didn’t have to whine my waist”.

Do you find 9jadailyfeeds useful? Click here to give us five stars rating!
Tags: BNXN Ruger