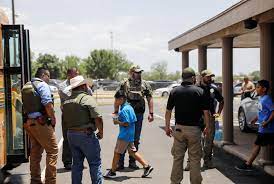 An18-year-old man has opened fire at an elementary school in Uvalde, Texas, on Tuesday, killing 14 students and one teacher, Gov. Greg Abbott said.

The police chief of Uvalde Consolidated Independent School District has said there also were multiple injuries from “mass casualty incident” at Robb Elementary School in Uvalde. The gunman is believed to have acted alone and is dead he said.

The suspected shooter, who might have had a handgun and a rifle, was fatally wounded in the law enforcement response to the attack. Robb Elementary school is about 83 miles West of San Antonio