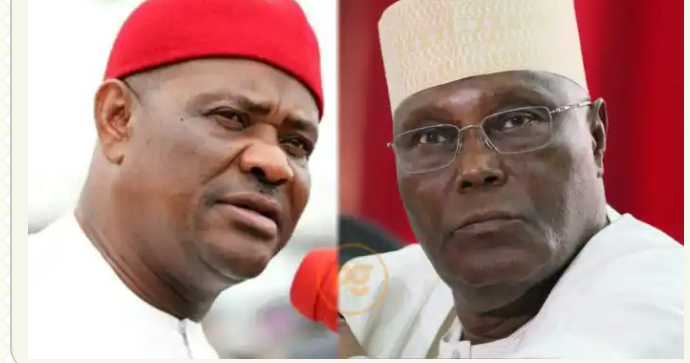 Rivers State Governor Nyesom Wike has accused the opposition Peoples Democratic Party (PDP) presidential candidate for 2023, Atiku Abubakar, of spreading “lies” about him in the aftermath of the party’s primary.

Mr Wike, who said he had been quiet since losing the presidential primary, criticized Mr Abubakar’s television interview on the party’s crisis.

He vehemently stated that Mr Abubakar had been using opposition party chieftains as “attack dogs” to spread falsehood against him.

“Since after our primaries, I have decided to be quiet because PDP is a party I love so much. I have never said anything and I decided to go back home (to Rivers state) and focus on fulfilling the promises I made to the people but there comes a time when the truth has to be told.

“Thereafter; he (Atiku) appeared before Arise television. So many lies were told, and you said I should not react to some of those issues, that is not fair enough.

“What he has said would be accepted as the truth. Look at his attack dogs; Sule Lamido, Babangida Aliyu and Abubakar Waziri, look at the statement they issued,” Mr Wike told journalists while arriving at the Port Harcourt International Airport, on Thursday.

Mr Wike had been dissatisfied with the PDP’s presidential primary and subsequent nomination of Delta governor Ifeanyi Okowa as Mr Abubakar’s running mate.

The governor stated that posterity would not forgive him if he did not speak out about the PDP crisis, explaining that Mr Abubakar had not been magnanimous in victory.

Despite the former vice president’s claims in the media, Rivers governor said he has yet to send any delegation to him since the presidential primary ended.

“But there comes a time that people will understand and know the true facts of things. So, obviously, whether I will speak or not, I will let Nigerians know the actual truth.

He added: “Look at the abuses they hauled on me. So, it is important for me as a person to react line by line, to the statement made by Atiku himself and his attack dogs.

“Look at a presidential candidate who believes he wants to win the election but someone who contested fairly with him has never raised any issue.

“I just kept quiet, I mind my own business and see how my state can move forward. Everyday people come up and they attack me. It is quite unfair I should let Nigerians know at the appropriate time so that posterity would be on our side that we have been able to keep the record straight.

“Nigerians would know what happened, they would know those who love this country,” Mr Wike added.

The Rivers governor, who also revealed that Mr Abubakar was in his house before the presidential primary to solicit a vote and his support, wondered why he could no longer visit him after winning the exercise.

He added that former Senate President, Bukola Saraki, reaching out to him to support the party, was done in a personal capacity and not for the party.

“It’s most unfortunate when people tell lies; I was in Spain when Bukola (Saraki) came to me that, how do we settle this problem, and I asked him if he was sent by Atiku and he said no.

“I asked what does he want me to do, I told him the issues and Atiku came to my house and said I should support him. So he doesn’t know my house again.

“People are now calling me on the phone to support him, those I don’t even know. They have reduced me to a ” guy” when calling and start begging.

“Atiku cannot say he has sent anybody to me. Let one person in the party say he came to see me and was sent by Atiku. Forget about those who are running around looking for what they have to survive,” the Rivers governor added.

Do you find 9jadailyfeeds useful? Click here to give us five stars rating!
Tags: Atiku Wike