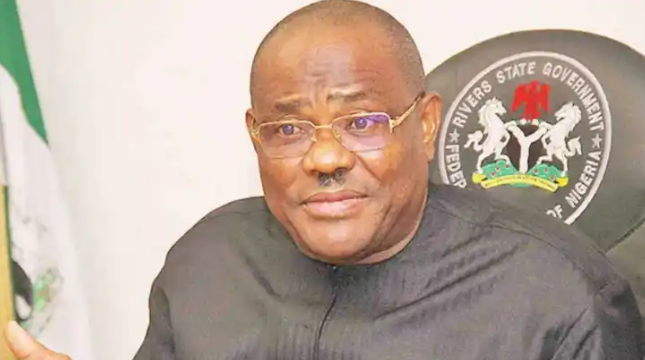 Rivers State Governor Nyesom Wike has denied reports that he ordered the removal of the Peoples Democratic Party flags from Government House in Port Harcourt.

According to social media reports, the governor directed his chief security officer to remove the party’s flags from the state’s seat of power.

However, speaking in Port Harcourt, Wike dismissed the report as false, claiming that he does not waste time on lies.

“You can imagine the kind of fake news people bandy about. I don’t waste my time on such falsehoods,” he added

The governor spoke when he received the state Publicity Secretary of the All Progressives Congress, Chris Finebone, and a former state Chairman of the APC, Dr Davis Ikanya, at his residence on Thursday, where the former officially dumped the APC for the ruling party in the state.

He promised to award the contract for the Opobo Ring Road construction before leaving office in 2023.

Wike said, “I will award the contract for the Opobo ring road and ensure that the contract money is made available before I leave office in May, 2023. It is God that has made your son to be the governorship candidate of our party.

“The same God will make him win to His glory. I did not plan it, but God did it. Opobo people should be thanking God for his mercies.’’

The governor, on the other hand, urged people to band together and support the PDP ahead of the 2023 general elections.

Do you find 9jadailyfeeds useful? Click here to give us five stars rating!
Tags: Pdp Wike