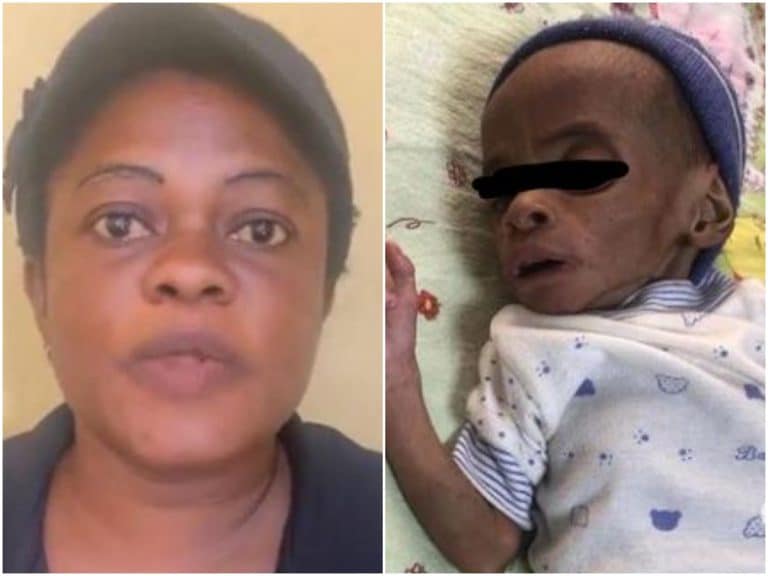 Tina Ugbonaya who was accused of starving her employee’s 5-month-old son to death has shared her side of the story.

Gift, the mother of the late child, alleged that her employer, Madam Tina Ogbonnaya, starved her child to death because she refused to pay her debt of N5 million.

Harrison Gwamnishu revealed that the 19-year-old mother got across to him for help after her madam, Tina, withheld her baby for months because she was unable to pay back the hospital bills that she cleared when she delivered the baby.

Harrison added that the baby was returned to the mother malnourished and critically ill with the intervention of the Lagos state Social Welfare and police.

However, he died on 17th December as the health personnel could not recuperate the sick child.

Tina Ugbonaya who is currently placed at rest at Divisional Police Station Ajah Lagos state disclosed that Gift, the mother of the late baby, Chidubem refused to care for her late child.

Ogbonnaya in a press interview, related that the baby lacked maternal care from his mother.

She posited that Gift left for the village to write her WAEC examinations shortly after the baby was born in June.

Ugbonaya stated that Gift refused to breastfeed her child, and eluded when her husband insisted she took care of her son.

Ugbonaya disclosed that the boy was cared for by a nurse whom she paid N30,000 as he was malnourished. This was confirmed by her husband.

Similarly, Gift in her part of the testimony, claimed that Mr. Ugbonaya welcomed her to Lagos and treated her well until she traveled in August; but when she returned, they began treating her badly.

She mentioned that Ugbonaya had accused her of hanging around with different men and even threw her out of the house late at night.

Gift said she called on the following day on when she would be getting her baby, but Ugbonaya asked her to return the N200,000 they spent on her in the hospital.

She revealed that Mrs.. Ugbonaya later called her and told her that the money was N5 million.

Do you find 9jadailyfeeds useful? Click here to give us five stars rating!
Tags: Child abuse