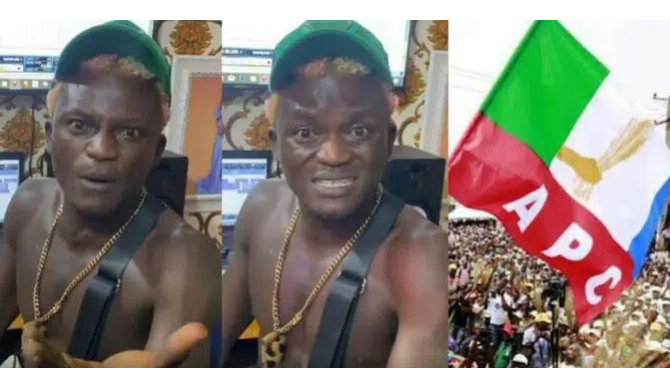 Habeeb Okikiola, better known as Portable Omolalomi, a controversial singer, has reversed his agreement with the All Progressive Congress, APC.

Taking to Instagram, the singer, who previously stated that he was paid to campaign for the All Progressive Congress during Osun elections, stated that his life is in danger.

The Zazu crooner insisted that he never intended to campaign for the APC, but rather was invited to a show and then found himself in the APC office, where he was forced to accept the deal, so money was involved.

He also accused the party of breach of contract by failing to pay him his outstanding balance. Portable later distanced himself from the cult group ‘One Million Boys,’ which he claimed to have founded.

Sharing the video, he wrote:

“This has come to an end that I have to voice out… please everyone I wanna let you know that I didn’t mean to campaign for APC it was a show they told me that am going to before I saw myself in APC office and as a man no need to worry I gats to do the job since it involved money . And what I meant by 1million boys is meant 1million followers . People are threatening my life ooo you should all look into this

I GO BY THE NAME PORTABLE OMOLALOMI, I DO MUSIC FOR LIVING

Watch the video below:

Do you find 9jadailyfeeds useful? Click here to give us five stars rating!
Tags: Apc Portable